My goal is simple. I want to make something new each day. Sometimes, I make stuff. Sometimes, I make a difference. On a good day, I get to do both. I often use design thinking as a framework for my creative work. If you’re interested in any workshops, keynotes, or sessions on creativity and design thinking, you can check out my speaking page. Here are some of the larger projects I’ve worked on over the last few years.

This is my latest project. I’m working with two other professors to develop an Equity in STEM certification program at our university. I have no idea how it will turn out but it’s been an incredible journey so far!

Empower: What Happens When Students Own Their Learning (2017)

This last summer, A.J. Juliani and I released Empower and, to our surprise, it cracked the top 200 in all of Amazon’s book sales. I was shocked because I had been so scared to take the creative risk and design a book that was truly visually-oriented. If you’re curious about what I mean, check out the preview on Amazon.

I recently created a side project for video prompts at videoprompts.com. These are sketch animation videos that can be used for design thinking projects, maker projects, divergent thinking exercises, or creative writing. If you’d like to receive a new one each time I release it, sign up here. Also, subscribe to the channel. It’s only been up for a few months but it’s already above 500 subscribers.

A.J. Juliani and I quietly launched a publishing company last year with the goal of empowering authors to have a book, audio book, and courses that would transform education. The first book, Your Starter Guide to Maker Spaces by Nicholas Provenzano launched at #1 in its category on Amazon and has continued to do well. Our second book, The Epic Classroom by Trevor Muir, was a summer hit. It’s one of the few education books with a high-quality audiobook version.

Over a year ago, I decided to launch a podcast that would complement my blog posts. Each episode is essentially an audio version of my blog posts. So, I’ve been surprised to see it move up the charts into a place where it regularly cracks the top five in K-12 education on the iTunes / Apple Podcast charts.

Launch: Using Design Thinking to Spark Creativity and Bring Out the Maker in Every Student (2016)

A few years ago, A.J. Juliani and I tossed around an idea for a book called The Creative Classroom. Given our combined experience with design thinking (as educators, leaders, and people who actively engage in creative work), we planned out a solid book on the topic. But then it grew into something much bigger — both a manifesto and a practical guide for how we can transforms schools into bastions of creativity and wonder. We developed the LAUNCH Cycle as a design thinking framework that any K-12 teacher could use.

Eventually, we created Launch, and we watched as it skyrockted into the top of the Amazon charts in education.

In our first year, we had over 40,000 students participate in our first ever Global Day of Design, in schools throughout the world. AJ Juliani and I developed this as a single day opportunity to use design thinking to spark creativity. Later, we developed the Mars Challenge as a December project and then had our second Global Day of Design, where nearly 100,000 students participated!

We just recently launched the Creative Classroom Academy. I am partnering with AJ Juliani to create a site to equip teachers to maximize creativity and boost innovation in their classrooms. You can take self-paced courses (like the design thinking course I created this last summer), access a suite of resources, and engage with a committed community of fellow creative teachers.

I began this project as a fun way to share my thoughts on life, learning, and the creative journey. I’ve always been self-conscious about my illustrating abilities, so this project was nerve-racking. However, the response was surprisingly positive and I grew in confidence and in my skills. I continue to create 2-3 sketchy videos per month.

Last year I started a weekly podcast, with my good friend AJ Juliani, called Classroom Questions! Classroom Questions was created to answer everyday questions that teachers have around the world on topics such as student engagement, classroom management, project-based learning, and how to make it on a teacher’s salary. We launched #1 on iTunes Education charts and look forward to starting up again in the upcoming year.

We started with two bold ideas: writing should be fun and sharing should be easy. We knew that the secret to improving student writing had to be improving motivation. So, we built a holistic blogging platform with custom user groups, private feedback, layers of privacy and hundreds of stunning writing ideas. In 2016, I moved out of the project, realizing that I had learned a ton as a founder and developer but that I needed to move on to other projects. It’s been fun to watch how Bob and Brad have expanded this platform and continued to make it into something amazing.

Honestly, this is the project that I am most proud of, because it was so deeply personal to me. It started out as a bedtime story and grew into a novel that I co-wrote with my wife, Christy. For a brief time, we cracked the top ten in its respective Amazon category. But, more importantly, I got the chance to see students get into making, engineering, and robotics as they read the book. It’s been awesome to watch.

For a full year, I worked on an initiative that combined coaching, professional development, and one-to-one devices in ELL classrooms. It was a powerful experience that taught me a ton about coaching and professional development. This is also where I got the opportunity to plan a summer STEM lab school with an emphasis on blending Constructivist pedagogy, blended learning, and language acquisition.

Back in 2008, I created a blended professional development platform. We incorporated action research, teacher surveys, and utilized our staff’s collective expertise in the implementation of a new type of weekly, personalized professional development. I learned a ton of things in the process, like the fact that the greatest barrier to tech integration wasn’t skills or motivation so much as self-efficacy. I also learned a valuable lesson about leadership. I wish I had known at the time what I’ve learned since then about the role of trust, vulnerability, and relationships to the success of creative work. This project was the beginning of my interest in blended and personalized professional development.

From 2004-2010, I developed a program called Project IMPACT. We blended service learning, technology, art, and academics. Students painted murals, did service projects, blogged, and created eBooks. It’s easy to point to projects and remember how awesome they were. However, I look back at Project IMPACT and I realize that there are things I would have done differently. I was slow to let go of control in some of the projects. I should have pushed for more student voice. There were times when I was impatient and placed the project above the people. 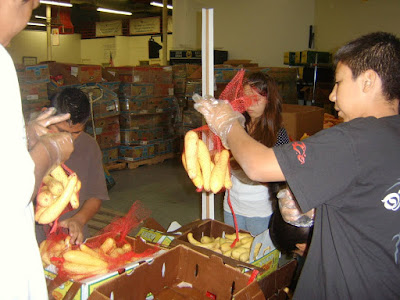 I first got into blogging as a senior in college. We called them “weblogs” at the time. During my first year of teaching, I helped students create an eZine (does anyone still use that term?) and blogs. They also created podcasts, documentaries, and multimedia packages. Most of our posts are gone, but some of them were saved in this archive.