Designing Group Projects So That Everyone Participates

Designing Group Projects So That Everyone Participates

Collaborative projects can easily fall apart in the classroom. You start with a great idea but next thing you know, you have half of your students checked out. So, how do we fix this?

Let’s just put it out there. Group work sucked for most of us when we were in school. You had one person who did most of the work, two people who did the bare minimum, and one person who disappeared altogether or sat around doing nothing.

When I was in school, I was either the one who did most of the work or the one who did the bare minimum. If it was a project I cared about, I was hooked. If the project didn’t feel authentic to me, I was happy doing just enough to get a B. However, I never understood the students who did nothing in a group, so I chalked it up to laziness. I always felt incensed by the kid who did nothing and earned the same grade that I earned.

Years later, I became a teacher and realized that kids are complicated. Sometimes, when a student seems checked out, he’s really just scared or insecure. His peers might see a flat demeanor and an “I don’t care” attitude, but when you meet with him one-on-one, you find that he’s terrified of screwing up the group project. Other times, you might have a student who doesn’t know where to start. She wants to do a great job, but the group seems to move seamlessly through the tasks and she can’t even get started.

The point is, it’s complicated. This is why we need to explore why students aren’t participating in group projects.

Why Isn’t This Student Participating in the Group Project?

If you consider why students aren’t participating, you’ll notice that it varies from group to group:

Ownership is the Answer

Even in our best projects, I never had 100% engagement at all times. I can’t promise a magical formula that you can use to fix every problem with collaborative projects. However, I had projects where nearly every student participated most of the time. These were the projects where we had shifted from group projects to creative collaboration. Here, students were empowered with a sense of ownership.

However, student ownership isn’t as simple as “leave them alone and get out of the way.” I tried that a few times and the groups checked out and didn’t finish their work. Students need structure in order for ownership to work. Total freedom leads to confusion. On the other hand, groups checked out when I created rigid structures and tight rules. If they felt too constricted, they would lose interest and put in little effort. So the goal, then, was to provide structures that facilitate ownership and agency while providing as much freedom as possible.

So, let’s go back to the reasons students fail to participate and consider how student ownership might prevent some of these issues.

In the case of student insecurity, students need to know that it’s okay to make mistakes. This is why it’s critical that they own the assessment process. As they move through self-assessment, peer feedback, and one-on-one conferencing with the teacher, they are able to set goals and move toward mastery. This is why I never graded the finished products in group projects. Instead, each student received an individual grade based on mastery of the specific standards. This eased some of the pressure of letting the group down.

It also helps to provide plenty of revision time. In the LAUNCH Cycle, we have the highlight and fix phase, where perfection isn’t possible. Every group analyzes what’s working and fixes what’s failing. Note here the difference between fail-ing and fail-ure. Failing is a temporary phase in the learning process. Failure is permanent. We want students to recognize what’s failing and work toward revising it.

Even in the midst of this, you’ll have moments when a student who has mastered a skill will step in and complete a part of the project for a student who is struggling. This student can fall into learned helplessness and simply check out. So, when should group members let one another struggle? There’s no easy answer. Honestly, it’s a hard thing to for adults to figure in high-functioning collaborative teams. It’s not always easy to figure out when to let someone struggle and grow and when to step in and help. It’s hard to balance the need to learn new skills versus having team members play to one another’s strengths.

It’s natural for struggling students to disengage when a task is too difficult. Mihály Csíkszentmihályi, the theorist behind Flow Theory, suggests that we are most likely to hit a state of creative flow when the challenge of a task matches the perceived ability level. If it’s too easy, they’ll be bored. If it’s too hard, they’ll be frustrated.

Image modified from the Flow Theory Image on Wikipedia

Here’s where you can empower your students to scaffold their own learning. Through conferences and self-assessment, they can determine where they struggling and what resources they can use to improve. Sometimes they need a tutorial video. Sometimes they need a peer to explain a concept or a skill. Other times, they might need sentence stems or graphic organizers. Instead of the teacher building the scaffolding for the students, this is a chance for the students to find the tools and tutorials in order to scaffold their own learning.

A little nuance here. There are times when you have to develop the scaffolding for students who are struggling. More often, you will need to model the process for finding resources and tutorials. However, as the year progresses and the students feel more empowered, they will own more of the scaffolding process.

Sometimes, the biggest barrier is confusion. Members of a group won’t know where to start or what to do. They might look checked-out but they’re actually overwhelmed. Students need to have a sense of clarity in terms of where they are going and how they are doing. This is why metacognition is so valuable. When you have students think through what they need to do, how they are doing, and what they need to change, they will be more likely to participate.

However, this is less of an issue when students own the project management process. When groups have clarified the roles and delegated the tasks, they are able to help one another move toward progress. Even then, it can be tricky. In some groups, a single leader will own the project management process and others lack clarity on what they are supposed to do. One solution is to ask students to visualize what they will accomplish and explain it verbally to a partner.

Ultimately, the biggest issue for engagement is motivation and buy-in. However, when students have voice and choice in choosing the topics, asking the questions, generating the ideas, and creating their prototypes, they will have more of a vested interest in the process. Students are then able to work hard without giving up.

But this type of ownership requires groups to be self-directed. This is what happens when teachers empower students to be self-starters and self-managers.

When Groups Are Self-Directed

We often use the expression “self-directed learners” to describe students who are focused, determined, and able to take charge over their own learning. While we often think of individuals being self-directed, the best collaborative teams have this same sense of self-direction.

Self-direction encompasses being both a self-starter and a self-manager.

In order for collaborative projects to work, students need to be self-starters. They need to feel the permission to initiate an action that moves the project along. This can be tricky because many students have become dependent on teachers to prompt them to get started. Often, a student will ask, “Am I allowed to do that?” You’ll hear students say, “I’m waiting for the teacher to tell me what do.” However, when students own the process, they are more likely to take charge and self-start.

It doesn’t end there. Starting something is one thing. Many great ideas fizzle out within a few months when people lose interest. There’s an often overlooked gritty and difficult side to even the most exciting projects. This is the idea of being a self-manager. If being a self-starter is all about sparking innovation in the midst of chaos, self-management is all about knowing how to stick to deadlines and routines.

If you’re interested in getting started with project-based learning, check out my Getting Started with PBL page, complete with articles, videos, and resources. You might also want to check out my PBL toolkit, which includes a set of projects and mini-projects, along with a Getting Started with PBL guide and a set of assessment resources you can use within the project-based learning framework. I will also send you a weekly email with free, members-only access to my latest blog posts, videos, podcasts and resources to help you boost creativity and spark innovation in your classroom. Just sign up below!

Get Your Free PBL Blueprint and Resources 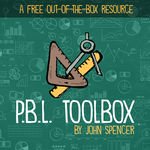 Get this free PBL Blueprint along with a members-only access to a free PBL resource each week for the next 4 months!

Success! Now check your email to get the toolbox!