Missing the Connective Power of Technology

Missing the Connective Power of Technology

You’ve seen the videos imploring people to “look up” and abandon their devices. It’s easy to look into a crowd and say, “They’re not interacting with each other.” But I’ve always had a hard time with these complaints. The problem isn’t the device. It’s the crowd. It’s the urbanization. It’s the packed rooms with people you don’t know. The reason I won’t look up from my device while I’m in the crowd is that talking to strangers is exhausting.

But there’s another part of this critique that bothers me. It approaches technology with a deficit mindset. I get it. Hugs are better than texts. Physical presence is an optimal choice. However, in an industrial society, we are stuck with isolation and our devices have the potential for relational connection. A forty minute commute is a forty minute commute.

Case in point: on the hardest days of teaching, I reached out to a community of teachers who have become close friends. We all met on Twitter and most of us have moved to Voxer. We know one another’s stories. We trust each other. There is much vulnerability. We make stuff together. We dream together. I’ve grappled with what to call it. A guild? A support group? I think I’ll just call them friends.

You could say that I should have reached out to people in the staff lounge or reached out to neighbors. However, when those weren’t options, this virtual community wasn’t all that virtual. It was real.

I am sitting in an airport right now after spending a full week with my family. Leaving is painful. My daughter cried this morning and I cried, too. Eventually, we will all be up in Oregon. But for now, this is our reality. It’s hard not to hug Christy each day before leaving for work. It’s hard not to share a meal together around the table. 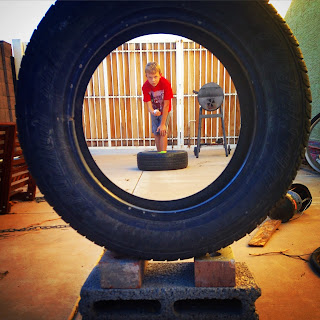 We played a game that my son invented. It was awesome. It was physical. It was the kind of thing that technology can’t replace.

We talk on the phone every single day. And unlike my childhood, I am in a world where I don’t have to pay long distance fees. I get to hear their voices and see their faces as they literally take me on walks around the house via Facetime. It isn’t perfect, but we share meals together using Google Hangout.

I don’t want to pretend that the technology is perfect. However, a mere decade ago, the loneliness would have been crushing. I would have been relationally distant. But right now, we get to connect. Every. Day. There’s power in that.

So, while I never want to ignore the dark side of technology, I always want to be grateful for the way it connects me to the people I love.